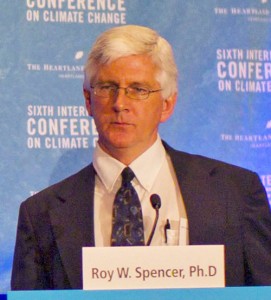 Heartland Institute Senior Policy Advisor Norm Rogers has an excellent piece in today’s American Thinker about Dr. Roy Spencer — a man Rogers says might be “the world’s most important scientist.” Read the whole piece below, but first see this excerpt about Peter Gleick, a frequent attacker of Spencer.

Peter Gleick, the third author of the attack on Spencer, is a water scientist and a self proclaimed climate scientist.  He is a member of the National Academy of Sciences and the recipient of a MacArthur Foundation genius award.  He is also a criminal, albeit one that avoided prosecution due to good political associations.  Approximately six months after the Daily Climate blast at Spencer, Gleick impersonated a board member of the Heartland Institute, a libertarian Chicago think tank with global warming skeptic tendencies.  Perhaps believing his own propaganda, he thought that if he could get the confidential packet of documents distributed at the Heartland board meeting, he could prove that Heartland had a nefarious agenda funded by the fossil fuel industry.

When that confidential information turned out not to be incriminating, he forged additional documents designed to discredit the Heartland Institute.  (He claimed the forged documents were sent to him anonymously in the mail.) He “leaked” everything to the global warming advocacy blogosphere.  But Gleick was an amateur criminal and was quickly exposed.  One of his mistakes was to feature himself in the forged documents, making it appear that Peter Gleick was a person of great concern to the Heartland Institute.  Gleick used a fake email account to execute his crime.

He clearly violated the federal wire fraud statue (18 USC 1343).  Gleick’s lies were widely disseminated and greatly damaged the Heartland Institute.  In spite of strenuous requests by the victim Heartland Institute, the administration’s U.S.  Attorney in Chicago has refused, so far, to prosecute.  Gleick was quickly rehabilitated, returned to his position as the president of the Pacific Institute and given the honor of an invited talk at the 2012 Fall Meeting of the American Geophysical Union.  Maybe the MacArthur Foundation will give him another genius award for escaping prosecution and professional shame.

Read the whole thing below: