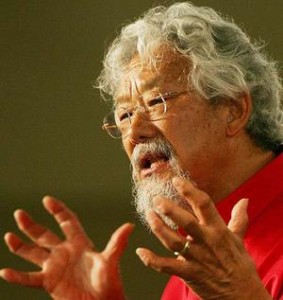 Peter Foster over at the Financial Post in Canada has penned a pretty devastating take-down of David Suzuki’s hypocritical crusade against foreign money (American greenbacks) finding its way into the coffers of Canadian non-profit groups.

Radical environmentalists tend not to be famous for their objectivity or sense of irony. Canada’s most famous eco-activist, David Suzuki, proved that this week by organizing a write-in campaign to protest a Senate inquiry into foreign institutional funding of Canadian political activism.

Independent researcher Vivian Krause unearthed more than $300-million of such eco-laundering, which has been used to campaign against B.C. fish farming and bring the Canadian forest industry to heel. Recently, both Prime Minister Stephen Harper and Natural Resources Minister Joe Oliver fingered foreign funding in clogging up the regulatory process for the proposed Northern Gateway pipeline, the latest front in the green industry’s war against the oil sands.

The Suzuki-to-Senate form email ventriloquized that robo-senders were “disappointed by the recent attempts of some senators to silence and demonize those who don’t share their positions.” It suggested that the Conservative senators, led by Nicole Eaton, were trying to “stifle the voices of millions of Canadians.”

In fact, “Silence and demonize” could be the Suzuki foundation’s motto. On its website, right beside Tell the Senate to stop silencing environmental groups sits a piece by Mr. Suzuki with the headline Climate change denial isn’t about science, or even skepticism. The same article was recently published in The Huffington Post under the headline Deny Deniers their Right to Deny!

There is no more objectionable term for legitimate skepticism than “denial,” which equates honest questioning with barmy claims that the Holocaust never took place.

Good to read someone else making that point. That slur is often repeated by “mainstream” media outlets who are either ignorant of the association — or intentionally make the association with a defamatory purpose.

Mr. Suzuki goes on to claim a “stepping up” of denialism, but his two examples are in fact of skeptics coming under manufactured attack. He smears Tom Harris, who was recently assaulted for a climate course he taught at Carleton University. Don’t bother to look at the science, suggests Mr. Suzuki (the course was in fact designed by eminent earth scientist Tim Patterson), just accept that Mr. Harris is a denier and a shill, and associated (without pay) with the U.S.-based Heartland Institute.

When it comes to Heartland, Mr. Suzuki cites something called “denialgate,” but fails to register that the only real scandal revolves around how a fellow eco-activist, Peter Gleick, obtained documents from Heartland under false pretenses then leaked them, plus a flagrant forgery, to the media. It is Heartland’s desire to teach some objective climate science in schools that has led to paroxysms of rage from other radical organizations such as Al Gore’s Climate Reality Project.

Read the whole thing, but Foster’s kicker at the end is a keeper.

The Suzuki foundation’s robo-email concludes that “A democracy functions best when all points of view are considered rationally and carefully.” To be fair, Mr. Suzuki only wants to put those words in the mouths of others. He could never possibly say them himself. His pants would catch on fire.